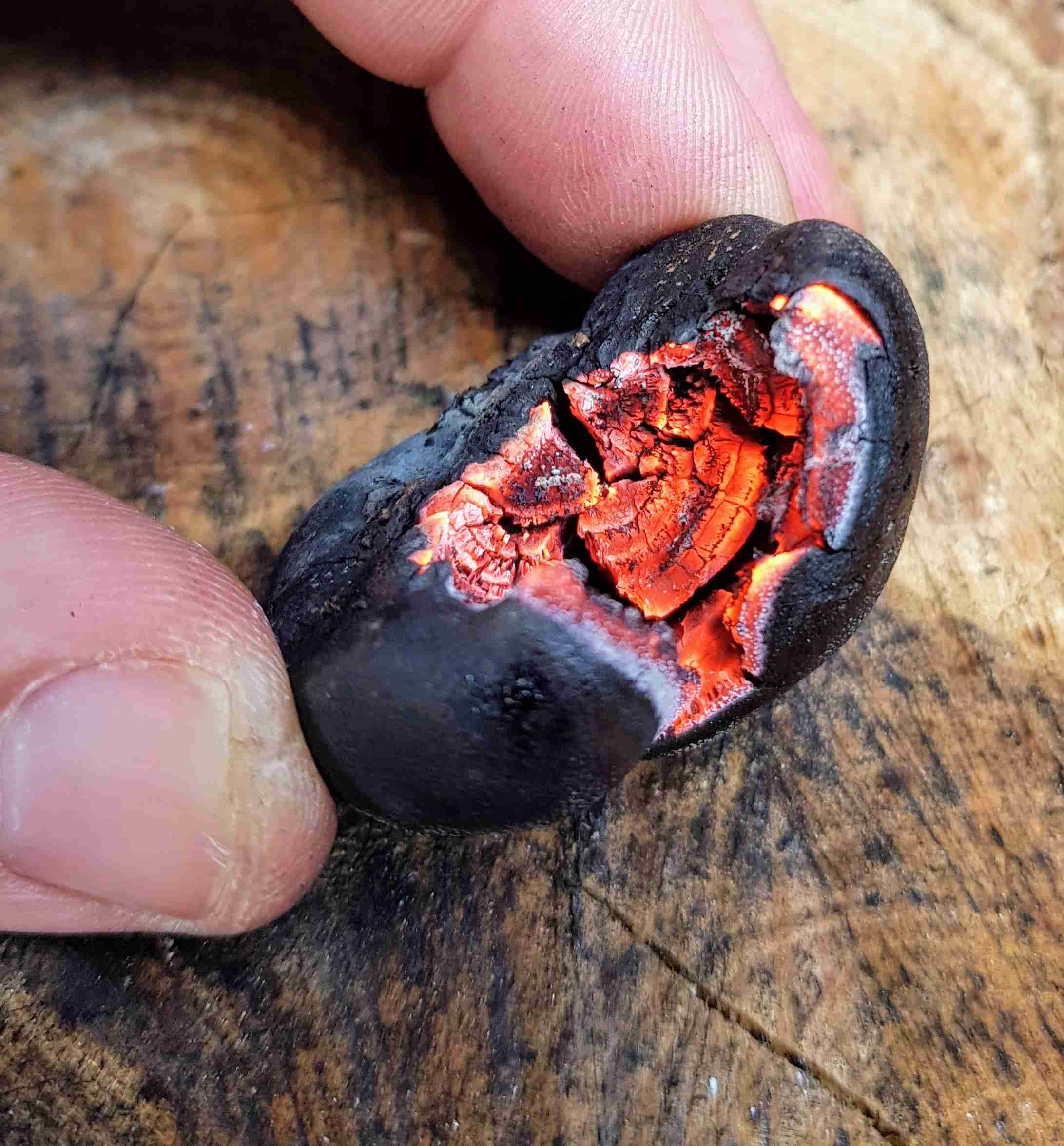 They favour Beech, Oak and Ash trees and are a relatively common fungi in the UK and mainland Europe.

They are usually black on the outside and black/silver internally – with the silver layers being the concentric rings inside.

These rings are known as growth rings or concentric zones.

Just like tree rings, each of these silver rings signifies 1 year’s worth of growth.

Daldinia concentrica was first described by the British mycologist James Bolton in 1971 as Sphaeria concentric.

It wasn’t until the late 19th century that it was reclassified and its scientific name (Daldinia concentric) given by Italian mycologists Giuseppe De Notaris and Vincenzo de Cesati.

The name “concentrica” comes from the concentric rings in the interior of the fruiting body which represent a season’s growth and reproduction.

It can take a spark from a firesteel or open flame which will then cause the fruit to smoulder, creating a large hot area once blown on – just like charcoal briquettes.

You can then use this to ignite a tinder bundle, such as dry, dead grass.

It will slowly smoulder for hours, and can also be used to transport your fire in the form of a glowing ember.

This enables you to effectively carry your fire with you, speeding up the firefighting process when you arrive at the new site.

You are obviously using them for this quality, but I would just caution you to think about storage once they are lit, as they effectively turn into charcoal.

Even a slight breeze will fan the ember and they do not easily self-extinguish.

You need to consider where you place them, as they want to burn and will ignite other objects accidentally if not monitored.

To extinguish these, you can cover them in water or crush them into the soil, presuming there is nothing in the soil that will catch, like peat, etc.

Use carefully and watch those fingers!

This is a great video from MCQ Bushcraft:

Rather than having the typical parts of a mushroom such as gills, a cap, a stem, or pores, this species consists of a stroma form with flask-shaped cavities called perithecia that are embedded within.

The fruiting bodies of D. concentrica are usually 2 to 10 centimeters in diameter and start off as matte, purple-brown before becoming jet black with age.

As the mushroom develops and ages, the stroma dries out and becomes more brittle, forming visible growth rings when cut in half.

The size of the fruit body is also an indicator of its age, with larger specimens being older than smaller ones, and some of these mushrooms staying on deadwood for many consecutive seasons.

Cramp ball fungus, or Daldinia concentrica, is a type of fruiting body that is characterized by the lack of a spore surface.

Instead of this surface, the fungus has protrusions on its exterior (small bumps).

These protrusions are made up of flask-shaped chambers known as perithecia. This is where ascospores (spores that have been produced meiotically) are located.

Due to its unique structure, the D. concentrica fungus is different from other varieties in that it does not possess a stem.

Instead of having a slender and straight stem, this species bonds closely with the surrounding deadwood via a large, flat area beneath its body.

Inside each ascus are eight ascospores arranged symmetrically.

Ascospores are spores contained in an ascus.

When these ascospores are forced out of the ascus, due to high water pressure, via the necks of the perithecia – they are released into the environment.

This leaves behind a darker patch of wood around the fungus.

The spores are ellipsoidal and measure roughly 12-17 by 6-9 micrometres in size.

Daldinia concentric has no noticeable odour.

Even though the flesh of this species is not poisonous, the fruit body is too hard to be consumed and should not be eaten.

The natural spore print of Daldinia concentrica is distinctive – it’s black and broader than the mushroom itself!

Usually, a black spore print can be found around 3cm wider than the fungus itself.

Cramp ball fungus can be found in woodland and deciduous forests.

It favours dead and decaying branches of Ash, Beech and Oak trees.

Daldinia concentrica can be found in deciduous forests of the United Kingdom, Ireland and mainland Europe

Although not as common, it can also be located in the temperate climate areas of North America, Australia, and South America.

This mushroom can be found year-round, however, the release of ascospores only occurs seasonally, from May to November.

Do not confuse with:

While both black, carbonaceous mushrooms tend to grow on dead wood, K. deusta does not form the same rounded fruitbodies.

It also does not have the characteristic ring-like growth pattern inside its stroma normally associated with Daldinia concentrica.

Where can I find cramp ball fungus? – FAQ’s

Why are they called cramp balls?

Cramp balls get their name from an old wives’ tale which says that carrying the fungus on your person would protect you from getting leg cramps.

Whether you buy into that or not, the name has indeed stuck and ‘cramp balls’ is what they are commonly referred to as.

The inedible fungus Daldinia concentrica is not poisonous, but should not be eaten.

It is too hard to be consumed anyway.

What sort of trees do cramp balls grow on?

Cramp balls will grow on dead Beach, Oak and Ash, but will also grow on other deciduous trees.

If you venture down to your local broadleaf woodland or forest, you may just find some.

According to legend, it was King Alfred who let the cakes burn.

During the 9th century, parts of Britain had been overrun by Vikings.

King Alfred was trying to escape the Vikings and is said to have taken refuge in an old woman’s house.

The old lady was baking cakes and asked King Alfred to watch over them while she went outside.

King Alfred forgot to watch over the cakes and they ended up burning.

Not knowing he was the king, he was scolded by the woman for this.

In his shame, he scattered the cakes in the woods to get rid of the evidence.

Due to the fact that Daldinia Concentrica is a black fungus, and looks burnt in its appearance, it is said to look like burnt cakes and has been tied to this legend.

It is commonly known as King Alfred’s cakes.

Where did Alfred burn the cakes?

Athelney, Somerset is where King Alfred is said to have burned the cakes, inside the home of a peasant woman.

Whether the story of the cakes is true or not, Athelney was of great importance to King Alfred and is where he built a fort and rallied his troops to fend off the Vikings.