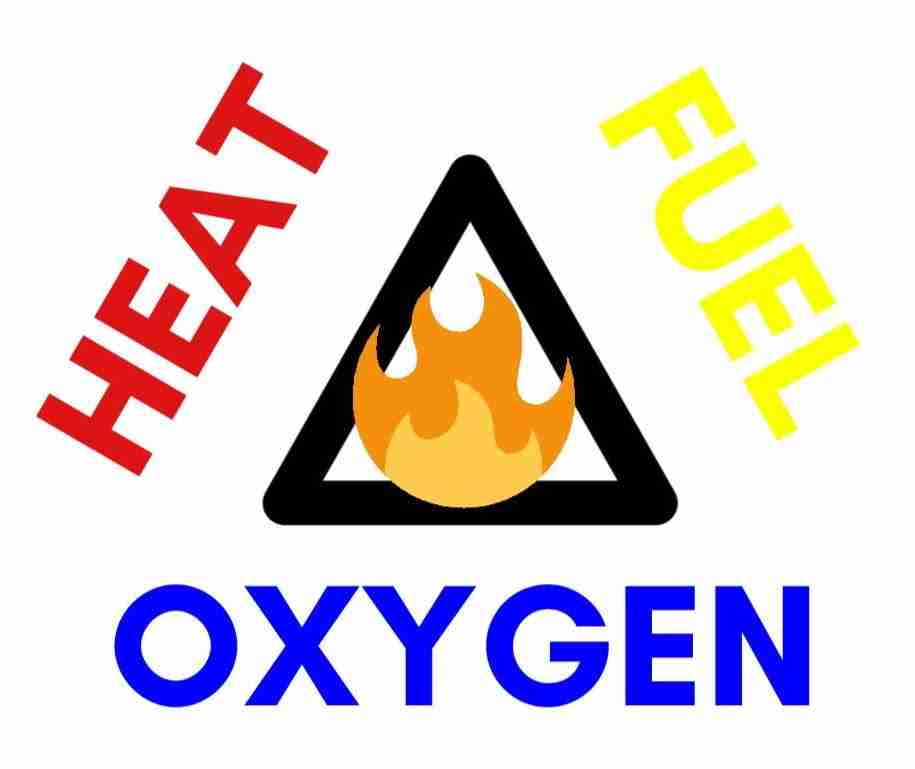 The three parts of the fire triangle are heat, fuel and oxygen.

Most of us will be aware of the fire triangle from those school science lessons.

However, it is worth briefly going over again though, to reinforce its importance when lighting a fire in the field.

Let’s take a look at each of the 3 components.

The fuel needs heat in order for it to release its combustible vapours, which in turn, ignite from a flame or spark.

This heat also dries out the surrounding material, causing that to release combustible vapours also and is how a fire spreads and takes hold.

This is why a wood fire will start slowly at first but start to blaze, once the correct conditions for it to do so are met.

A fire needs fuel to burn. This is pretty obvious, but the type of fuel needs to be considered.

The most common fuel that we use in bushcraft is wood, as it is freely available and for the most part, sustainable.

You can’t usually just set fire to a large log though, as you need to build the fire up in stages.

To light an all-wood fire, we generally need 3 grades of wood fuel:

Tinder: This takes your ignition source and transforms it into a flame or ember.

Kindling: These are small pieces of wood that have either been collected in that state, ie small twigs or that have been chopped down to size from a larger log.

Main fuel: Anything larger than kindling – usually large branches and logs that are dry and form the main fuel source.

A fire requires 16% oxygen to burn.

Oxygen acts as the oxidising agent for the chemical reaction that produces the flame.

A flame will not form without it.

Therefore, oxygen is vital to the success of a fire.

Fresh air contains approximately 21% oxygen, depending on your altitude.

Therefore, as long as you maintain a good supply of fresh air to the fire, it should continue to burn, as long as the other conditions are met.

Without all 3 parts of the triangle present, you will not achieve a sustained fire.

If you have fuel and fresh air for example, but not enough heat to ignite and sustain it, your fire will go out.

Equally, if you have heat and fresh air, with wet fuel, such as very damp wood – your fire will not start.

The fuel element has not been satisfied and the triangle implodes.

An example of not meeting the oxygen requirement would be that you load too much fuel onto the fire, too quickly, in which case you smother the flames and kill off the airflow.

To be successful, you need to keep all 3 elements in balance, ensuring a sustained and controlled fire for you to warm yourself and cook with.

Keeping all 3 parts in mind will ensure greater success.

The video below from Coalcracker Bushcraft explains this visually:

What are the 3 stages of a fire?

Generally speaking, a fire has 3 stages:

Growth stage: when the fire is building and gathering heat and voracity. In this stage, the fire is very much dependent on the oxygen and fuel supply that it has.

Fully developed: this is the stage when the fire has reached its peak and is now giving out a good amount of heat. You should also have a good bed of embers now to keep the fire sustained.

Decay: once you stop feeding the fire with fuel, the fire will enter the decay stage and start to burn down. The embers are still extremely hot at this stage though and will likely ignite any fresh fuel that you put on. If left alone, however, the fire will die out on its own.

What happens when 3 elements of the fire triangle combine?

If you have the correct proportion of heat, fuel and oxygen present and you have a source of ignition, such as a spark, or flame – then you have a good chance that a fire will start, as it has all the required elements.

Always be mindful of potential ignition sources and keep things such as tinder and stored wood well away from anything that could ignite it.

We hope you found this a good refresher on ‘What are the three parts of the fire triangle?’

It’s a very simple concept, but quite often forgotten about when trying to get a fire lit.

Next time you do light a fire, try and bear all the elements in mind and you should have more success

Want more??? We have loads more articles for you to read in our fire section here.